The province of Örebro lies in the middle of the country, due west of Stockholm. This is an area I have not previously explored, and I have been eager to find rugs designed at mid-century by the Örebro County Craft Association. In this case, photos in the digital museum helped me identify one rug by a designer who got her start working for this association. A rug for Asker church in Örebro was designed in 1956 by a young designer, Birgitta Hagnell-Lindén, who worked for the Örebro läns hemslöjd from 1954-56, after graduating from Konstfack, the school of art and design in Stockholm.

Birgitta Hagnell was born in Halmstad, the capital of Halland’s province on Sweden’s west coast, where her father was the editor-in-chief for a local newspaper. She recalled, later in life, an apparently blissful childhood with summers spent in a tiny summer community of Görvik, an easy six miles west of Halmstad, positioned above a long stretch of sandy beaches. Birgitta and her three brothers, parents and maid occupied a classic little red Swedish summer house built in 1932, the year she was born. In her recollection, these summers were periods of endless freedom, with swimming, games and explorations with a whole tribe of visiting children, punctuated by smells of ferns and roses. She and her three brothers inherited the little old-fashioned house and she spoke about the fact that her own family and her brothers’ families delighted in its quirks and were determined to keep the house very much as it always was, modest and friendly, with everyone a bit on top of each other.

Hagnell developed an interest in painting and sketching growing up, perhaps through an uncle, Axel Hagnell, living in Gothenburg, who was a well-known illustrator of some 20 children’s textbooks on subjects as diverse as drawing, zoology and Swedish history. She mentioned in an interview, choosing whether she would like to work with glass or with textiles, but chose textiles as a more practical way of making a living. She attended Konstfack from 1950-54, went to work for Örebro County Craft Association for just two years, and after marring an agronomist Bengt Lindén in 1955, and having two sons, became an active free-lance designer working out of Örebro, doing some work for this craft association, and other of her own projects. She designed rugs for a number of churches, and began to turn increasingly turned to large abstract “paintings” in wool, many of them landscapes or seascapes.

She was awarded a number of prizes, and was still actively working and showing her work in 2012. She passed on 2018

Örebro County Craft Association was founded in 1883, the fourth oldest such organization in Sweden, although even as early as 1836 the impetus to foster craft in the county had been founded by the a local household association.

When Birgitta Hagnell first came to Örebro, the county craft association, Örebro läns hemslöjd, occupied a one of the oldest buildings in the city, Arbetshuset, a former workhouse. Built with solid walls and high ceilings, this was a prestigious location and a useful space for displaying large work. The craft association occupied the building from 1943- 82; the address was Olaigatan 20, located on the Svartån river on the opposite bank from Örebro castle.

Perhaps the most important project Hagnell- Linden did when working for Örebro läns hemslöjd was a very large rug for Asker church. Photographs were taken in the display area of the Örebro läns hemslöjd shop at the time the rug was completed. These are shown below. The tag on the rug identifies both Birgitta Hagnell-Lindén as designer and weavers for Örebro läns hemslöjd, Rut Andersson and Anne Marie Karlsson. This tag also notes that a local group, the Alltorps Sewing Circle were the donors of the rug to the church

Asker is a small town located about 12 m south-east of the main provincial city of Örebro, after which the country is named. The Asker church itself was located outside the town at a sort of cross-roads, with a school next door, and a generous church yard, for graves, to the other side.

A stone-walled church was first built on this site in the middle ages and then substantially rebuilt in the 1730s-40s, incorporating some of the older walls. The church suffered a fire after being struck by lightening in 1764, and then was rebuilt in the current simplified Gustavian style in the late 1760s. The church was renovated a number of times, in the 19th and 20th centuries with a neoclassical altar added in 1828, the church tower at the entry built in1858, a modernization in 1915, and two stained glass windows added in 1935. A 1961-2 renovation followed the commissioning of this rug, with the intent to return the church to its generally Gustavian appearance. The open style pews introduced in the 1915 renovation were replaced by the more traditional closed style. A painted-over shadow image of drapery on the wall around the pulpit was repainted, the ceiling was painted blue, and the stained glass windows were moved from the front of the church to the long side walls.

Two friendly helpers from Örebro, Mia Haglund and Sylva Schaefer, provided the following images of the very large rug which Birgitta Hagnell designed, currently in place in the church. (I will discuss their contributions further in a future post on other Örebro church rugs).

According to information provided by Asker Church, the design of the rug  reflects several symbolic motifs. The geometry of the rug’s central panel was meant to recall the biblical story of Jesus feeding 5000 people in the wilderness with five small loaves and two fishes, a story which (says a church description of this rug) prefigures the practice of communion— an appropriate story and image then, for a rug lying in front of the altar rail where communion is taken. The four-fold repetition of the image reflects the fact that this is a story repeated in all four gospels. The little green “ash” leaves on the two long ends of the rug offers a sort of visual pun on the name of the church, with “ask”, meaning ash in Swedish.

After she stopped working for Örebro läns hemslöjd in 1956, Hagnell-Lindén still continued to design work for the county craft association on a free-lance basis. Among other projects for a number of public buildings, she designed quite a few rugs for area churches, including several in Ekilstuna, the county adjacent to Örebro to the east. These are shown in the following photographs:

In 1969, Hagnell-Lindén designed a rug for the large neo-gothic Olaus Petri church built in 1912 in Örebro. This piece was woven by Orebro County Craft Association and called “From Darkness unto Light” (“Från mörker till ljus”). I have not been able to find a photograph of the original design, but in 1987, church lighting elements fell on the rug and burned a portion of it. How much, I don’t know, but one report says that “The carpet had to be re-woven and the artist then took into account the church’s new color scheme.” So it is unclear to me whether this is the rewoven 1969 design or a new 1987 design. In either case, it is a very effective translation of the church’s decorative colors and patterns to something evidently modern, yet still very sympathetic to the church architecture.  The current church website also shows another rug of similar design placed even closer to the congregation. I assume this was also designed by Hagnell-Lindén but do not know the date this was added.

In 1978 Hagnell-Lindén designed a much smaller rug for St Pauli church in the main city of Eskilstuna, which had a similar composition and feel to the one for Olaus Petri, although the church itself, a small modern church whose interior is sheathed in plywood, could not have been more different.

A number of wall-hangings for area churches both in Örebro and Eskilstuna, and for a crematory followed. Although earlier ones used figures, these became looser and began to move in the direction of abstract landscapes. Several of these are shown below.

Hagnell-Linden’s work became increasing abstract and large in scale, almost like paintings in wool. In 1986, she was awarded Sörmlands konst främjanet prize—a prize designed to encourage and promote an artist’s work. It looks like this may have encouraged her to be even freer and bolder in her compositions.

In 1989, Hagnell-Linden composed a large choir rug for Fors Church, the oldest church in Eskiltuna, dedicated to St. Eskil. Although this was a medieval church, most of what stands today is from the 17th-century. The altarpiece is by a French painter, said to be from the mid-1600s, and from what I can see, it looks like an image of Christ’s ascension, or taking up into heaven, after his crucifixion and resurrection. Hagnell-Linden’s design is an enormous contrast in sensibility yet her confidant and vivid palette is a thrilling expression of her increasing focus on abstract weaving. Yet her large flat-weave rug also reflects, almost exactly, the coloration of the pictoral altarpiece and captures, in its watercolor-like blur, much of the same sense of dramatic movement and perhaps even represents a departure from the colors of earth toward those of heaven.

In addition, this particular piece also offers evidence of the ability of Swedish congregations to embrace modern art and craft work and see these kind of pieces, which American churches would probably view as too challenging, as enhancements and vital updates to their church environments. 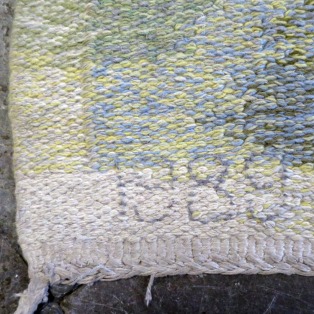 Britta Hagnell-Lindén, Details of choir rug in flat-weave, rölakan, for Fors Church, Eskilstuna 1989, showing date signature and signatures of designer and weaver. I do not know who the weaver, whose initials are HD, was. Photo by Elisabet Jansson.

At some point Hagnell-Linden and her husband moved from Örebro to Gnesta, about 25 miles southwest of Stockholm and close to the east coast. Her explorations in weaving seem only to have continued in this new home. She joined an arts circle, at one point returning to her early interest in glass, and collaborating with a local glass artist, Ebba von Wachenfeldt. The blue and white piece in the photo below is one Hagnell-Lindén made by incorporating small pieces of glass in her woven design.

Gnesta, was located near the sea, and in a piece entitled “Fetknopp,” a rya rug, Hagnell-Lindén incorporated pieces of salvaged fishing net, mixing these with linen and cotton netting. I wish I could find a picture of this piece, but have not. In 2005 she told an interviewer , “In the past, when the nets were worn out, they were used to make rugs.” As with her experiments with glass, it seems like Hagnell-Lindén’s early experiences, interests and in this case, her seaside memories, were still enriching her work.

She also continued her explorations of very large colorful woven pieces.  Birgitta Hagnell-Lindén was a confidant woman who started her career with an enormous church rug, defined in overtly Christian symbolic forms, and who finished, still confidant of her ability to work at large scale, with pieces marking out her own personal landscapes.

Askers Church, with particular thanks to Dagmar Talbäck, enthusiastic 84-year old church warden who welcomed my emisaries, Mia and Sylva.

Haglund, Mia, and Sylva Schaefer, Örebro county researchers and visitors to Askers and Ärla churches on my behalf.

Jansson, Elisabet, blog, textil-inslag.wordpress.com post titled Matta och Maria, March 25, 2020, with photos of Hagnell-Lindén’s rug in Eskilstuna Church.  Many thanks to Elisabet for introducing me to this designer.

Drop me a line at: